I have a confession to make: I live in Sweden and I have lupines in my garden.

I didn’t plant them, they were there when I moved in, but after two seasons I haven’t removed them either. In Sweden, I see escaped lupines along roadsides and although I’m not sure how much of a problem they are to native ecosystems here*, they are definitely non-native.

Seeing lupines along the roadsides is a treasured memory from my childhood. The kicker is that lupines aren’t even native where I grew up. Likely introduced in the early 1900s, lupines are also common along the highways of Nova Scotia. I loved seeing those colourful embankments rushing by through the car window when I was a kid and I love them still. It is the sort of love you can’t really quash with your ecologist’s brain.

And then there is one of my favourite children’s books. I love the story of the independent girl who grows up into a woman that travels the world. Her last thing to do is to make the world more beautiful and she does by planting lupines. She becomes the lupine lady and spreads seeds everywhere she goes to make her part of the world more beautiful. The strong female lead and the message of the book are something I want to share with my daughter but the ecology is crap. Set in New England somewhere, the lupine seeds are likely the garden-variety invasives that are present all up and down the east coast. While Miss Rumphius might have added beauty to the world in one sense, you could strongly disagree if you value native species and habitat. Then those endless monocultures of lupines could definitely be viewed in a much uglier light. I am introducing those concepts to my daughter when we read the story too but it is a much more subtle take-away. And she probably sees through my explanations to the truth: I like lupines.

When I see the odd lupine patch in along the highways of Sweden, I am reminded of home. And I understand. Humans have been carrying around their useful and beautiful plants as they have moved around the planet for hundreds of years (to thousands of years, Thanks Jeff for pointing this out!). Some have stayed in our gardens but others have spread out and out of our control. As an ecologist I understand the impacts these escapees can have on the ecosystems they spread to but as an immigrant, I now also understand what it is like to feel a more at home when you see those familiar plants. 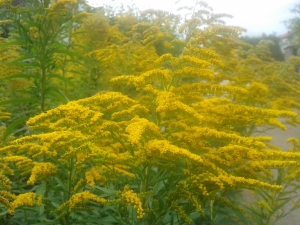 Goldenrod was a sure sign of the late summer growing up and now thanks to gardeners it seems to be a part of the Swedish landscape as well.

Plant introductions and invasive species control are complicated matters, especially when an invasive plant becomes a part of the cultural landscape. My own struggle occurs right in my backyard. I won’t add plants I know to be invasive here (too bad goldenrod, how I love you too) but removing the lupines would be mainly for show, since they are unlikely to have a huge impact on any further invasion. Still it weighs on me. Or at least it will until I see their flowers next summer and procrastinate their removal again.

*a quick literature search shows that there isn’t much published on lupines in Sweden other than as a useful tool in restoring soils for forestry but it is possible that the information is more likely to be found in the white literature. Yet another reason to learn more Swedish.

6 thoughts on “Invasive species, immigrant emotions and a guilty conscience”