Teaching basic science is difficult when some folks deny the validity of science. Facts are facts, but there are powerful interests working to convince us that facts aren’t factual. Meanwhile, our incoming government is collaborating with a group that operates a watch list to track the activities of liberal professors. Earlier this year, a leading advisor to the new administration proposed reviving the House Un-American Activities Committee. I imagine that some faculty would be high up on the list of targets.

So, what should we change about what happens in our classrooms?

I think we should be teaching the same way we have been.

There’s an argument to be made that that this professor watchlist site is not going to result in additional horrible things. This website appears more like a sophomoric prank than a serious threat. But serious threats often start out as sophomoric pranks (like the campaign of our President-Elect). When something like this emerges from a source that has the ear of the White House, it is our duty to condemn rather than to look askance in silence.

Nobody belongs on such a list, because such a list shouldn’t exist. For example, I think any economist that teaches the preachings of Milton Friedman in a positive light is dangerous and partially responsible for structural violence committed by US. But you don’t see me pushing a “conservative economist professor” watchlist. Academic freedom goes right and it goes left*. 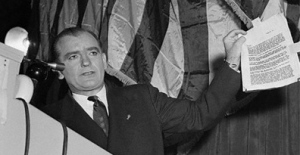 I think it’s quite possible that some wholly reasonable professors, who are even-handed and welcome discourse from conservative students, might end up on this “watchlist” because they are merely teaching about topics that annoy the ideologues that are now running Congress (such as climate change, evolution, trickle up economics, and civil rights).

I don’t think I can get inside the heads of students who would want to report their professors to a list like this. But, if a student ended up reporting me to The Man, then I’d have to think about whether it’s because I told my students what to think. If they reported me just because they know what I think about some issues, well, then that’d be just weird if it doesn’t have to do with what I’m doing in the classroom. But if they reported me because I told them they should be raging liberals too, then that’s not criminal, but it’s also not indicative of the most effective teaching.

I start the semester by telling my students that my goal is to teach them nothing, but instead, I want to set up circumstances in which they discover facts and ideas. Excellent teaching results in the ability to think critically.

I don’t want my students to know that climate change poses a threat because I tell them it does. I want them to be aware of the relevant data and understand it.

If my students report me to a conservative watchlist because I’m preaching ideas about climate change and evolution and whatnot, then I think I’ve screwed up as a teacher. It’s not the climate change or the evolution that is the problem, but the preaching. Preaching doesn’t change minds, and it doesn’t help people learn. When people encounter viewpoints that contradict their own, the most frequent response is to reject the contradictory viewpoint. Even when it comes from an expert.

As scientists, we’d like to use reason to make sure our understanding is best supported by evidence, but people are irrational. If we’re going to teach evidence-based decision making in our students, then we teach best by modeling this behavior in ourselves and in our classes every single day. This is why inquiry-based teaching is so important, and why lectures are less likely to change minds on issues like climate change and evolution.

I don’t think fear of a watchlist should affect how or what we teach. I also think that if we’re teaching effectively, then folks of all backgrounds should be leaving our classroom thinking that they are welcome.

*If conservatives have a problem that so many professors are progressive, then they might consider why a career of reading, writing, teaching and basic research attracts and grows progressive views.

One thought on “Teaching in a time of professor watchlists”