As often happens to me, I have a post idea banging around in my head (or sometimes started on the page) but before I fully flesh it out, some amazing scientists post about the idea even better than I was thinking. Sometimes that inspires me to finish my own post and put it up, others times I let it drop because what has been said feels like it fills the niche.

This week was no different. But reading the connected posts actually speaks to the topic itself so I’m inspired to write my own piece.

I’ve been thinking a lot about creativity and what is novel in science. There are two great posts on creativity (Experimenting with Creativity) and novel ideas  (Where do ideas come from and what counts as “novel”?). Both are worth the read.

My own inspiration started outside science with a gift of a colouring book this Christmas. I haven’t coloured in years and here was the opportunity to try again. Perhaps it would even allow me to create a kind of meditative peace to deal with all the unknowns of unemployment*. The book sat around for a few weeks (we had a puzzle to finish) but I eventually picked up the pencils and a picture and went for it. Is colouring in someone else’s lines creative? I’m sure it isn’t nearly as creative as drawing the original outline but the act of colouring is not without choices. Obviously what colour you use is a choice but also how to combine them, how hard to press, whether to use texture all affect the outcome. Here’s an example of the independent choices made by me and my six year old daughter for the same picture: 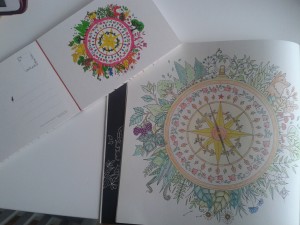 Can you guess which one is mine and which the 6-year-olds?

So there are gradients of creativity that can easily be applied to science. You might be the original creator of a new idea or method but we also need the kind of “colour in the lines” science with different experiments and systems. Are they less creative? Maybe, but since they are needed to move forward ideas, concepts and fields how much emphasis should we put on things being novel?

I’ve probably been at my most creative when I have combined fields or techniques. During my PhD, I measured phenotypic selection on floral scent. At the time of running the experiment (2007) it hadn’t ever been done, so I didn’t have any framework to follow. Although it isn’t an incredibly novel idea (emphasized by the fact that two other labs did similar experiments around the same time) it was novel in that no one had any evidence for the microevolution of scent yet. Measuring selection on “scent” also posed a problem for all of us working on it because scent is actually a rather complicated trait made up of 10s of compounds depending on the species. So you can look at amounts of each of these compounds, compound classes, totals, and it is further complicated by the fact that we know some floral visitors pay attention to the ratios between compounds as well**. All three groups got creative and solved the problem in different ways. By some extraordinary luck we all gave talks at my first Scandinavian Association of Pollination Ecologists back in 2011, which is just a small scale example of how new ideas can crop up independently because the foundations are set.

Also when I was a graduate student, I joined two community ecologists in a project looking at diversity and phenotypic selection. We devised a project that combined looking at genotypic diversity and species diversity in the same experiment with phenotypic selection on a single focal plant. None of these combinations had been done before either so in that sense it was novel but the foundations for each of these ideas in separation had extensive research. In the end we were almost too novel for our own good because it added complexity to the experimental design and we published the data separately. For one, evolutionary and community ecology use the term “selection” to refer to different things which made writing about them together cumbersome.

Although the process of designing these studies was creative, it was also a natural combining of the people who were working together. In both cases, I combined my expertise of how to measure natural selection with the strengths of my collaborators to come up with a study to address some holes in our understanding. We got to science and ask some new questions but you can argue where on the creative scale this fits. Certainly it is not Nobel prize material (if there was one for ecology) or the theory of evolution or truly “novel” ideas that will revolutionize the field. Some of the methods were basically colouring an outline by following previous experiments and others went outside the lines to fit our particular questions/system/experiment. I’m sure you could play up or play down the level of creativity needed to come up with these ideas but I am proud of these contributions.

Clearly science is a creative enterprise but I am finding it interesting to think about how we value different kinds of creativity. Given the often perceived and real pressure for novel ideas in publishing, I think we sometimes create an atmosphere that to be a good scientist we need to be the ones who draw a new picture rather than those that creatively colour in the lines.

I’m not sure what the answers are but I do know as a beginning scientist I was terribly daunted by having to come up with original and novel research. Now that I’ve been around a little longer I am more confident that I can contribute to my field without producing earth shattering discoveries. And I can have something to add to the conversation, even if others have already done so.

*After one picture I think I have decided that knitting is more relaxing and the products are more pleasing.

**The problem of ratios is a real one and adds a layer of complexity to a selection analysis that to my knowledge no one has tackled yet.

***I was going to try using linked footnotes and that seemed like a good idea but ran out of time. Sorry Margaret!

2 thoughts on “What is creativity and how creative are scientists?”