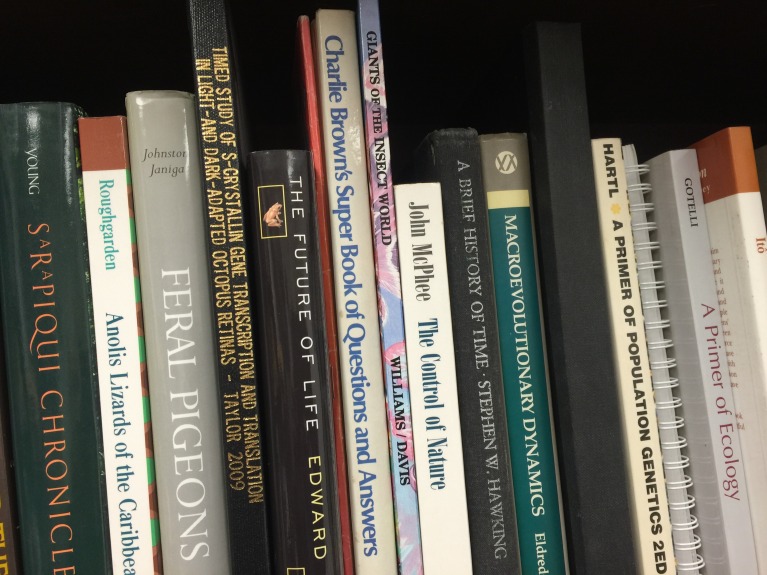 “Natural history: an approach whose time as come, passed, and needs to be resurrected.”

A reconsideration of “new conservation.” Also, if you’re not familiar, this has an explanation of what “new conservation” is. Man, conservation biology is an ideological and theoretical and practical mess. Holy crap. I’m not a fan of Mongabay for a variety of reasons, but this seems worthwhile.

This has really made the rounds because it’s fascinating, if not a surprise: In the “reality” TV show The Biggest Loser, people were given substantial dietary and exercise regimens to lose a lot of weight in a short period of time. This story explains how not only did the contestants mostly gain the weight back, but after they lost the weight, their basal metabolic rate was crazy low. If you talk to anybody who is working to lose weight to something more healthy, you’ll know that the body fights like heck to keep that weight back on. Not only does the body tell you it is starving, but it also works way more efficiently.

How to handle an idiotic review.

A comparison of Toddler vs. CEO.

Jerry Coyne notes that a piece in Nautilus plagarized his bot fly story. Or comes very close to plagiarism because it’s so derivative from a conversation of his with journalist Robert Krulwich. It’s sloppy journalism, to say the least. Perhaps not coincidentally, Robert Krulwich wrote a blog post this week about how scientists worry more about getting funded more than anything else. Its’ a great blog post. And you know why? Because it’s pretty much cribbed straight from Hope Jahren’s Lab Girl. The author is cited and quoted. And the other text where she isn’t cited and quoted? It’s basically adapted straight from the book. If you subtract all of the ideas from the blog post, then really, it would be a blank page. I was disappointed to see this Krulwich post get circulated so much when what Krulwich should have done is write his own frickin’ piece or just told people to read Lab Girl and leave it at that. But hey when something is so well written, it’s hard to just not want to copy it, I guess. Perhaps I have higher standards for what should be in a blog post, especially when it comes from someone like Krulwich on a site like National Geographic? I’ve come to expect nothing from Nat Geo anymore.

David Quammen writes an ode to Yellowstone and the far-reaching consequences of informed wildlife management. This is a story from Nat Geo. Yeah, I’m a hypocrite.

I missed this 2013 paper when it came out (or I forgot about it?), but this great review of teaching strategies to promote engagement and equity is pretty great.

While we’re back in 2013: Don’t beat ’em, join em? Instead of just saying the h-index sucks, maybe adapt it to include peer review effort?. This was in TREE.

Even more from 2013! The problem with Medium. Which is a writing platform that a lot of people use. If you write for or read on Medium, this is an important read, and it explains why I don’t use Medium. (I should also add that the past week has set a personal record for me. Four different outfits contacted me and asked if they could reprint a Small Pond post of mine on their own website. Three of these joints are biggish operations with substantial ad revenue and a ton of full time employees. And they just wanted to put my stuff on there for free. Crikey. I should add that the two higher ed major sites in the US (The Chronicle of Higher Education and the upstart slightly more progressive Inside Higher Ed) do not engage in this practice as far as I know, as when they’ve printed my stuff they’ve always paid me. Not enough for me to buy a vacation home, of course. But they pay people for their work. Which apparently something that Times Higher Education can’t necessarily claim. Shame on you, folks, for exploiting academics for free content. You’re no better than the Huffington Post.)

I recently visited with a friend of mine, who is a vet, and learned how the bottom has fallen out of the vet job market (as explained in this 2013 article. What’s up with the 2013 things I’m finding this week?). When I was in college in the early ’90s, it was really hard to get into vet school and once you were a vet, you could make a good living running or working in a practice. That’s when there were very few schools, that were run by Ag schools. When state funding for public universities declined, vet schools made up the financial shortfall by charging more tuition. And accepting more students. And more accredited schools have popped up. So now, getting into vet school isn’t as hard, but you have to pay a lot more. And when you graduate, there are more people competing for a limited job market, and yo have more debt. So if you have a pre-vet student in your office for advising, make sure they know this! This is just one example about how college professors aren’t the best career advisors. Our direct experience with non-faculty job options is pretty weak, and often outdated. Another thing I learned visiting this friend is that sand people of Tatooine sound like donkeys. Or is it that donkeys sound like the sand people?

Canine apiary inspectors work to prevent the proliferation of foulbrood a disease that kills honeybees.

Peer review is broken, said every scientist ever, perhaps even before the word “scientist” existed.

“I would rather do anything else than grade your final papers.”

There was a really weird thing that happened with a paper by Hanna Kokko. About a decade ago, she published a paper modeling mate searching behavior. She recently published a newer paper on the same topic. In the process of writing the new papers, she discovered an error in her earlier paper, which led the authors to reach a different conclusion than they would have if the error didn’t happen. This wasn’t an intentional altercation of the data or the model, but instead, was an honest mistake. She contacted the journal to issue a correction to the paper. But instead of a correction, the paper was retracted. She doesn’t like this, as reported in the first report in Retraction Watch. Then, a reviewer of this paper wrote about this in Retraction Watch about how he didn’t like the retraction, and in the comments to this post, Kokko chimes in herself. I’ve always thought of a retraction as a way of saying, “Let’s pretend this paper never existed, that for ethical reasons it should not have come to print.” If a paper can be corrected, then it should not be retracted. For example, I know of a paper that came to print last year using purloined data from a research who was not aware of and did not consent to publication. That paper could have been retracted for ethical reasons, or it could have been corrected by altering the list of authors. And the latter is what happened, and I thin that’s fair. In this case, Kokko and colleagues made an honest mistake and then were up front about it, and they could issue a correction and then the problem would be fixed. Why the heck retract it?

(By the way, Kokko’s 2008 book on modeling for field biologists is useful and accessible).

This is perhaps the most willfully ignorant consideration of student concerns about campus climate to appear in the Chronicle. And that’s saying a lot.

This wouldn’t be an academic blog unless I made a point to include a post about the excessive pay for administrators. As these things go, this is a really good one along those lines.

The New York Times has an interactive feature where you can visualize relationships among money, race and academic performance in school districts across the country.

The manipulation of test scores can have a huge effect on future earnings of students. Here’s the original paper from the national bureau of economic research. Holy frickin moly, this is nuts.

Where are suicide rates the highest? Greenland.

TV is too big, they say.

“Digital Humanities” is a thing. I gather it has something to do with doing humanities research by collecting data in some systematic fashion using digital resources. Some folks seem to think that this approach is tied to some kind of political bias or agenda, which on the face of it is kinda silly, as explained by Alison Hedley.

Okay, one Prince memorial: remarks from fellow musicians about his performance at George Harrison’s induction into the Rock and Roll Hall of Fame.

What it means to go home.