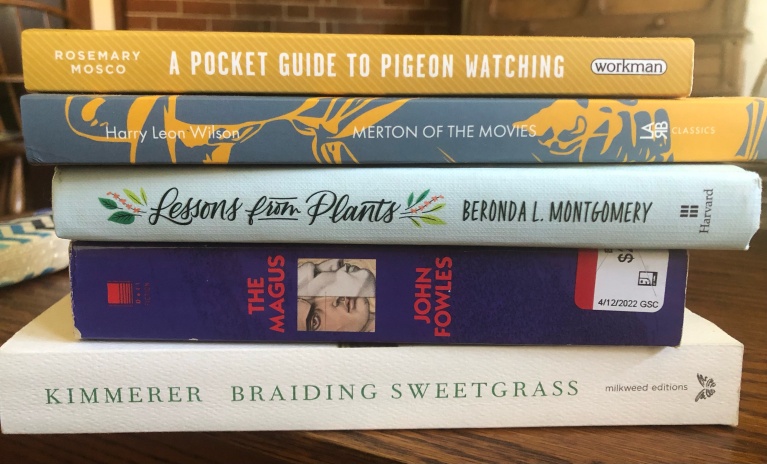 Since it’s been quite a while since the last post, I’ve accumulated a particularly good crop of reads.

Trees don’t rush to heal from trauma and neither should we.

A math professor from Columbia applied his own skills to demonstrate the extraordinary and counterproductive measures that his own institution has gone to in order to game a ranking system run by a magazine. Absolutely bananas. This is absolutely damning. Here’s the executive summary and here’s the long-form version. (And here’s the NYT article, but I haven’t read it, but I’m linking to it because it’s the local paper.)

Here’s a solid article explaining how mainstream media is dominated by graduates of just a few universities and all of the problems this creates. Which I realize is a theme that I’ve been harping on for years. But it’s still a problem, eh?

An interview with Christopher Newfield, a scholar of higher education, that might make you want to read his books.

While Nosferatu was clearly scaffolded on the intellectual property of Dracula, until I read this article I had no idea that the film was almost entirely lost to history because of copyright protection regulations. Wow. And without Nosferatu, we would never have had Willem Dafoe being so amazing in Shadow of the Vampire.

Failures to disagree are essential for environmental science to effectively influence policy development. This is a really thought-provoking paper about the effect of theoretical entrenchments and “locked-in debates.” “By allowing locked-in debate to persist, ecology is undermining the role of science in policy production.” As I’m head off to start the Earth Leadership Program this summer, I’m thinking about how I can more concretely contribute to effective policymaking with respect to climate change, biodiversity, and all that stuff. Understanding the feedbacks between ecological theory and on-the-ground decision making is a blind spot for a lot of us, and humanity genuinely needs policy-engaged ecologists now more than ever.

Speaking of evidence-based policymaking, do you know about Colin Purrington’s long-term efforts against fraudulent mosquito eradicators? See the twitter thread below, and his story on his own site here:

Gender bias in student evaluations of teaching in political science. This paper makes a strong contribution by showing not just that there is gender bias in evaluations, but also that women are rewarded by students for time-intensive emotional labor in their teaching, while men are rewarded more for style and technical expertise. Which means that if women are getting rankings that are equivalent to men, then it’s probably because they are expected by students to put in a lot more work.

Tuberculosis’s route to the Americas is rather surprising. What a wacky series of events, and a skillful piece of science writing equal to the task.

On the meaninglessness of the phrase, “inclusive excellence,” which I suppose why so many institutions (including HHMI) have embraced it.

If you think your students have been struggling more than ever, you aren’t wrong.

After The Great Pivot should come The Great Pause. There are a lot of lessons to be learned from our pandemic teaching experiences, at the institutional and individual levels. Instead of rushing into a new and different normal, this is a time for careful reflection to make sure that the choices to keep some practices and abandon others are evidence-based and designed to meet the needs of our students.

How journalists can do a better job reporting on climate change.

Backyard bias equals racial bias in citizen community/public/participatory/whatever science. Admittedly, some of my recent research efforts have been built on backyard sampling and my collaborators who developed this project have been highly aware and concerned about this dynamic, and work to implement approaches that provide opportunities for everybody in the community to be fully engaged. Depending on the kind of science you want to do, it clearly takes more effort and creativity to prioritize equitable representation among participants, and it’s worth the effort.

Open-access publishing fees deter researchers in the global south: “One of the great ironies of open access is that you grant authors around the world the ability to finally read the scientific literature that was completely closed off to them, but it ends up excluding them from publishing in the same journals.”

How a virus exposed the myth of rugged individualism.

This article about kitchen design is a wild journey.

“The ‘rockstars’ of any profession usually have another secret: they’ve found themselves in a situation in which they’re able to still do one job. I don’t mean that they’re not doing several things at once. I mean they’re not trying to do the work that three or four people.” (If this resonated, maybe check out my ‘octojob‘ post.)