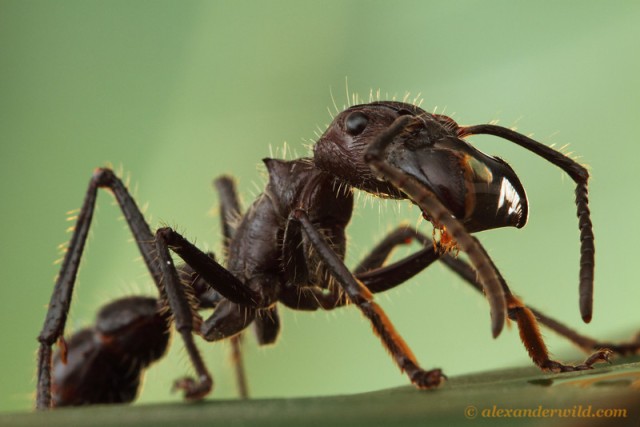 This is the latest paper from my lab, which I’m really excited about. When we designed the project, several people told us that it would be useless. “It’s pointless to study the ecology of a symbiotic microbe in the wild when we have yet to specify its function inside the host.” It was only two days ago that Meg Duffy said that the microbiome is the most important recent conceptual advance in ecology, and I agree with her. That’s one of the reasons we did this project, to look at the ecology of gut microbe in the wild, which appears to be a true frontier.

There are plenty of advances that are yet to be made in the field biology of microbes, and these discoveries do not have an a priori requirement understanding of the comprehensive biology of an organism before understanding its ecology.

The microbial contents the guts of bullet ants are remarkably heterogeneous. In some colonies of bullet ants, we found oodles of a particular Bartonella microbe, closely related to those that facilitate N cycling in other animals. And most closely related (as far as we know) to other Bartonella inside ants on other distant continents. But, many bullet ant colonies lack this microbe. Perhaps not by accident, bullet ants have a remarkably varied diet, and some colonies eat more insects than anything else, and other colonies are functional herbivores. Perhaps the presence of this N-cycling microbe might be associated with – or even respond to – the trophic position of the ants?

Aren’t we getting ahead of ourselves by studying how diet affects microbes in the wild, when we don’t know what the microbes do? I say, phooey. Most of the ants that we study in tropical rainforest are just as mysterious as microbes. We don’t even know what most species of ants even eat! Nobody tells me I can’t study the ecology of ants without doing a comprehensive study of their diets and relationships to other organisms in the ecosystem. So, why do we need to know exactly what the role of microbe is in the gut of an animal before working to understand its distribution and ecology?

Working out the function of these microbes is mighty damn hard, if not impossible at the moment. But we can understand the distribution of these critters among colonies of ants an understand the environmental factors that shape its occurrence, as well as doing experiments to see how we can make incidence increase or decrease.

So, we ran an experiment that gave the ant colonies supplemental carbohydrates, or supplemental protein. (This was not easy at all, though you might think it would be. A post on this is forthcoming.) And we checked to see if how the microbes responded. It turns out that when you feed colonies sugar, this microbe becomes more prevalent. Moreover, the results from the manipulation recapitulate the ambient relationship between diet and microbial prevalence. Some colonies consistently collect more sugary nectar from the canopy than other colonies. (Learning this involved going out into the forest in the middle of the night, for an entire summer, to measure bullet ant colony diets.) The colonies that collect more nectar are more likely to have this microbe. So, we can clearly conclude that a sugary diet is predictive of the incidence of this particular Bartonella inside bullet ants.

And the stable isotopes tell an interesting story, too.

So what does this mean? While most ant species that forage in rainforest canopies are functionally herbivorous, bullet ants are true omnivores. They also don’t have the specialized obligate N-cycling microbes that the more herbivores canopy ants have. We found that the close bullet ant diets get to their competitors in the canopy, the more likely they have this facultative N-cycling microbe. If we’re trying to understand how the evolution of obligate sugar-feeding evolved among the dominant ants of rainforest canopies, then I suggest that understanding the ecology of the facultative bullet ant/Bartonella association is to get a window into the evolution this form of dietary specialization.

How this project happened inside a teaching institution

This was the Master’s thesis project of Hannah Larson. Hannah came to my lab with a specific interest in doing field ecology. Based on preliminary finds predating her arrival, Hannah and I developed this project in collaboration with Shana Goffredi, our microbial ecology collaborator. After taking courses for a semester, Hannah headed to the rainforest for eight months to conduct this project at La Selva Biological Station. Hannah found, marked and measured over a hundred bullet ant colonies (which became the start of a long-term monitoring project), and overcame a series of challenges in getting the molecular work done in a rainforest field station (with substantial help from our collaborating lab at the University of Costa Rica). Undergraduate Erica Parra is the one who (by her own choice I should point out) spent long nights in the pitch black of the rainforest at the base of actively foraging bullet ant colonies. The work was funded by an NSF-IRES grant OISE-1130156, though we scrambled for additional funds for reagents that were not in the project budget.

You can find a copy of this paper on my lab’s website.