A couple months ago, a discovery was in the news: A “new human organ.” Oddly enough, I was already familiar with it, just a little bit.

In grad school, I taught a couple human anatomy lab sections. It was pretty much a disaster for me, considering my training focused on the ecology and evolution of ants.

The lab that I was teaching had four cadavers. As TAs, we kept ahead of the students by participating in dissections just days ahead of the students, getting to new systems and new details as the semester progressed. This was the first chance I had the chance to look at the insides of people in detail, and it was really amazing, and there were lots of surprises — one of which is how much inherent variation there is in how the parts connect up and how some people have extra parts or missing parts. (For example, I’m one of the guys that is missing both palmaris longus muscles. One of our cadavers was from a person who was just born without a gall bladder. Never was there. And one cadaver had two renal arteries on each side. Weird.)

One of the biggest surprises to me was when we were pulling out the guts for the first time — intestines were connected together with this massive and bulky structure. I asked, “whoah — what is that?” And I was told by more experienced folks, “Oh, that’s just the mesentery, it’s there to connect and keep the other parts in place.” And I thought, okay. That makes sense, I guess, though it did seem to be rather more substantial than necessary for that function. Looking back, there was just a 15 second period of time, in which I saw I thing, didn’t understand it, and then it was explained to me by a person who knows. We experience that all of the time in science. 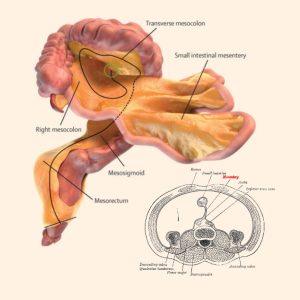 I’m not saying, “My gosh! I knew the mesentery was an organ the whole time, and now I’ve been proven right!” But I am saying that I initially thought it was an organ when I first saw it, and I was taught out of this by experts who thought that it wasn’t.

Yes, the year is 2017 and we are still figuring out what parts are inside our own bodies. For those who’ve read Rob Dunn’s The Man Who Touched His Own Heart, this shouldn’t be a surprise.

Richard Feynman once said, “Science is the belief in the ignorance of experts.”

I read this statement as, “There is a lot to learn in every field, and science improves upon and corrects the information we have. To make new discoveries, you have to assume that the experts are unaware of a lot of things, and wrong about some things too.”

It’s useful to be skeptical about things that have not been shown to be true or untrue. We have a tendency to fill in the gaps of our knowledge with inferences, and this keep us from discovering new things.

Meanwhile, the future of our species requires us to accept facts about climate change that we have well established with facts. Denialism (which claims established facts are not facts) is designed to mimic skepticism (which sets a high bar of evidence for facts). The ability to tell the difference between skepticism and denialism is now a necessary part of basic scientific literacy, and it’s one opportunity to explore the difference is to talk about how we learn new things.

One thought on “A new human organ, and the ignorance of experts”