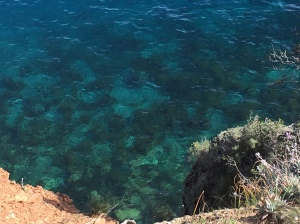 I just had the pleasure of spending a couple days hiking around the interior of Catalina Island. The last time I did this was about 23 years ago, when I was a student on an undergraduate field trip for a course in Conservation Biology.

Here’s an incident, or really just a conversation, that left a little scar on me.

Around the time I was finishing up my PhD, I was given the opportunity to give a seminar at my alma mater. I had sit-down conversations with some of my undergraduate professors. As I was somewhere in the process of starting a faculty position, this was a mind-bending role change, no longer a student but now a junior colleague of my former professors.

I took three excellent courses with one professor, whose courses were well designed, all with engaging and creative labs, and with lecture content well grounded in the primary literature. I worked somewhat hard and I learned a helluva lot, especially in Evolutionary Biology and Biogeography. He definitely had his theoretical biases (a la Gould & Lewontin), but this didn’t stop him from being an excellent instructor.

When we were chatting, he was interested in learning what I was up to, and how I ended up working on the ecology of ants. I told him that my interest started with the evolution of sociality, and that I was curious about the Hamiltonian predictions for colony structure. (When I started my dissertation, people had only just abandoned using allozymes to look at relatedness inside colonies). He tilted his head and said asked me a bit more. Before I realized what was happening, he let me know he wasn’t familiar with kin selection theory. He said that he hadn’t heard of any of the WD Hamilton papers from the 1960s. He didn’t seem think that this wasn’t a big deal, that this was just an inside baseball discussion among social insect experts. We moved on to new topic.

But it was a huge deal. If you’re not a biologist, you might not recognize this But if you are a biologist, you’ll recognize that my professor openly volunteered (to his credit?) that he was ignorant of something really foundational in his field. Frankly, nobody teaching evolutionary biology at the college level, at the time, should have been unfamiliar with the concept of kin selection.

This blew my mind in three ways. First, it’s bizarre to think that the man who started me on the path to Ecology and Evolutionary Biology didn’t have an adequate map of the territory. Second, he was a top-notch instructor and it was clear to me that we didn’t suffer much (if at all) for his lapses of awareness in the field. Third, I suddenly realized why the supposed controversies that I learned in college were actually tired arguments among everybody in grad school. My professor was merely out of date.

In hindsight, I see he was a classic example of driftwood. But not deadwood. He was a dedicated teacher and engaged evolutionary biologist, but his research was not well engaged off campus.

The stereotype of the professor who teaches outdated material is one who is retired-on-the-job, uses the same powerpoints over and over, appears bored, and uses old textbooks because they can’t bother to update the course.  That stereotype was not embodied by my Evolutionary Biology professor. But the content itself was not only stale, but it wasn’t even up to date at the outset. And he was an evolutionary biologist!

So, which one would have been better for me? Either the professor who was an amazing teacher and specialist who was aware of some topics, or one someone who was not a specialist who covered all of the bases? I think that’s an unfairly dichotomous question, so I won’t answer it. But it’s fuel for thought.

If I had to list three undergradaute-level course titles that would be in my field of expertise, they would be ecology, insect biology and tropical biology. I would clearly choose to amplify some topics over others, and these decisions would result in a course that would look very different than if it were structured by a non-specialist who was merely assigned these courses.

For example, I’m not a cracker-jack population biologist, and I don’t build life tables for my work. This is, however, bread and butter for introductory ecology courses. Since I don’t regularly work in population biology, I can’t honestly tell you whether this is an actual skill that every undergraduate biology majors needs to know. (I’m not sure it is, though some of the embedded concepts are very important.) Would I include in my class? You bet I would, because it’s in every textbook and it’s expected of everyone who finishes introductory ecology and I wouldn’t want to be responsible for underpreparing my students. Even though I’m an ecologist, I wouldn’t teach only the parts of the ecology that are my specialty. But I can see how some others can be tempted to leave life tables out of an ecology course. And, I wonder if they need to be within the   30 lessons we get to teach each semester.

Overall, I have no idea how the community collectively decides what concepts are truly important. I don’t think the K-12 approach of statewide standards is the way to go for higher education, and the culture of Assessment is still leaving us plenty of latitude, which is good. But why do we teach some things as canon, and overlook others?

I get that some topics are important. But what makes them important? What defines a field? is it the people actively doing research or the people looking at a distance? When we define the topics of lessons in our syllabi, what are the criteria we use when making our choices? I haven’t thought much about this other than “I think it’s important,” but I realize that’s not good enough.